***We continue to consult with the Health Department and our partners at the State. We have been advised that Employment Horizons (Cedar Knolls facility) will need to be closed through at least Friday, April 10th.  Please scroll for additional information.*** 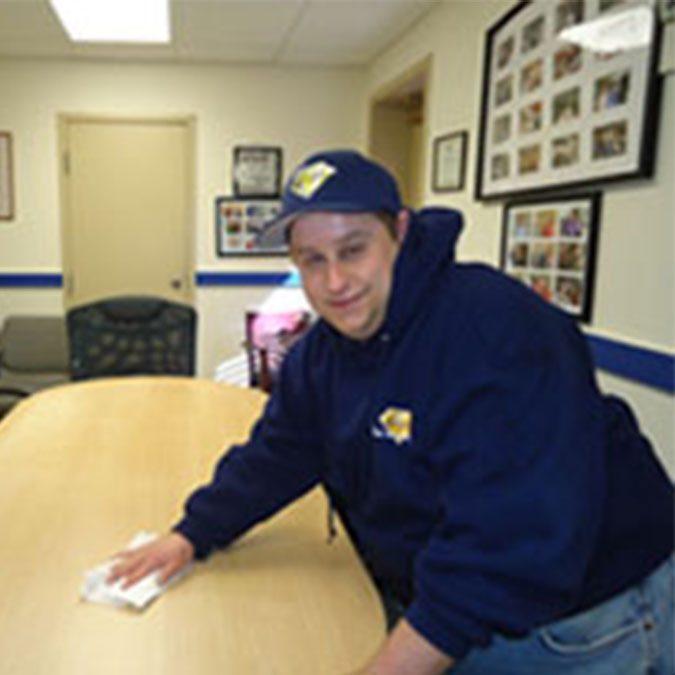 Kevin’s work ethic is undeniable. As Maintenance Supervisor at Gogel Tire and My Limo, he starts his day at 7:30 a.m. Over the past fourteen years, he has made himself indispensable, cleaning the inside facility, taking out the garbage and recycling and maintaining the parking lot.

“I make sure we keep everything clean,” Kevin says.

Aside from his regular tasks, he’s also known to pitch in wherever needed, whether refilling the customer coffee pot or fixing the vacuum cleaner.

So self-starting, in fact, that Kevin chooses to go beyond working a five-day, 40-hour week at Gogel Tire and My Limo. For the past 11 years, he has also worked one day a week as a cleaner at Picatinny Arsenal, where he is coached by staff from Employment Horizons, Inc.

Kevin says that his position at Picatinny has allowed him to gain valuable social skills, which he often applies at Gogel Tire and My Limo as he greets customers.

“It helped him to be able to make friends,” Howard Gogel said of Kevin’s position at Picatinny, which he has held since 2001.

His two jobs also give Kevin the opportunity to earn a paycheck, with which he is both wise and generous.

“I save a lot,” Kevin says. “Sometimes I take my dad to breakfast, and I buy things for my niece.”

Kevin also has a full social calendar, even with a work schedule that would seem overwhelming to most. His hobbies include photography, camping, and taking trips into New York City.

But unlike many, Kevin isn’t just “working for the weekend.” The obvious dedication and friendly disposition that one observes as he performs his day-to-day duties suggests how much he enjoys his work.

And just as Kevin values his job, his fellow coworkers and customers at Gogel Enterprises value and appreciate him and the high quality of his work. From office space, to the lobby, to the service center, he plays an integral role in the maintenance of every area.

“This place would be a mess without Kevin,” Howard Gogel says. “When he goes on vacation, we all really miss him.”