***We continue to consult with the Health Department and our partners at the State. We have been advised that Employment Horizons (Cedar Knolls facility) will need to be closed through at least Friday, April 10th.  Please scroll for additional information.***

Kimberly Develops Skills to Attain a Job She Loves 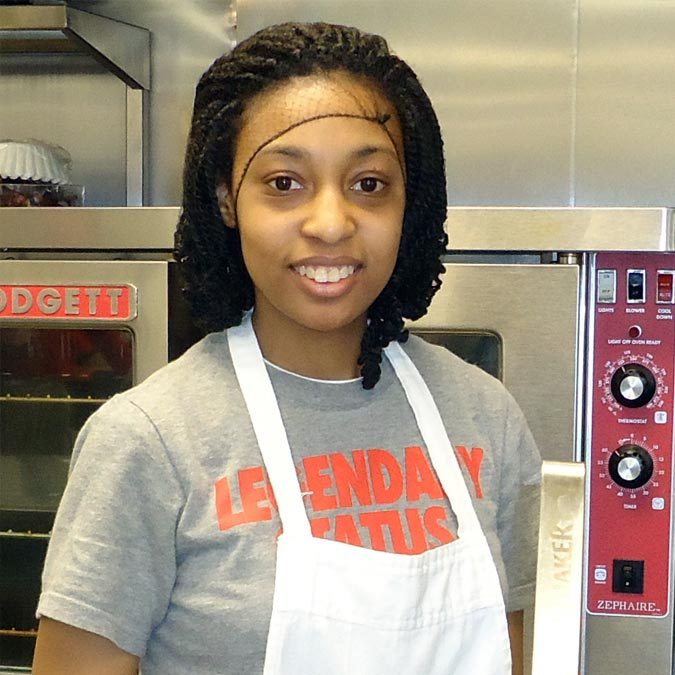 Kimberly began working in the Fulfillment Center, and subsequently moved to Culinary Arts. Working 5 days a week, she learned the curriculum through classes taught by the Culinary program coordinators. She learned safety in the kitchen, infection control, hand washing, food preparation and pot washing.

After completing the classes, Kim became hands on in the kitchen. She learned various skills and then applied them in performing food prep and serving work. She was very nervous in the serving area and needed support to learn to interact with consumers due to her shyness and inexperience. With capable support she gained confidence. Kim performed various job samples including a “stint” at the bakery in the Parsippany Shop Rite where they fell in love with her. Utilizing public transportation including Access Link, she is highly independent and learned the transportation system to be here on time always with enthusiasm.

She continues to work on her interpersonal skills with the assistance of her job coaches. She has recently been placed at a local Wendy’s as a “crew member” primarily performing sandwich preparation, but is also assisting with cleaning the lobby area and returning trays. During her interview, Kim was recognized by the manager immediately as a regular customer who patronizes the popular food chain. The interview went well and Kim impressed the manager with both her knowledge of the operation as well as her ability to perform the job. And it was her infectious smile and enthusiasm that set her apart from other prospects. She was mentored on the preparation of more popular menu items and honed her skills in this area.

Close to home, she can continue developing her independence by getting to work on her own. Employment Horizons’ staff has observed that over the past year “Kim has matured and developed the skills needed to be successful in her new community placement.” Kim says, “Thank you to Wendy’s and Employment Horizons.” She greatly appreciates the help in developing skills that have allowed her to work in the community in a job she loves.