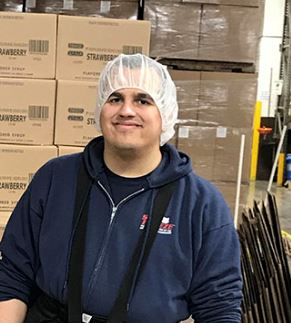 Alek Rodriguez secured a position at Sea Breeze in Towaco, NJ in 2012. He originally started work at Sea Breeze, a manufacturing and distribution center for beverages, through a transitional high school program. The staff was so impressed, they hired him for a full time position. When he started five years ago, he was given the opportunity to work on their assembly line. Now, Alek is responsible for preparing the assembly line to be ready for production.

Sea Breeze has been located in the New Jersey/New York area since 1925, and is a fourth-generation, family owned manufacturer. They carry a variety of beverages and syrups and work with restaurants, bars, cafeterias, and catering halls to bring the drinks to the customers.

Alek’s job requires him to complete various tasks at the distributor. His responsibilities include packaging products, performing quality control for the bottles, and maintaining various work stations in the production area. Also, Alek is capable of filling in wherever he is needed, doing any job that is asked of him. He has several different skills that allow him to work anywhere in the facility. Alek knows his job very well and is able to transition from one task to another without any issues. His supervisor described him as reliable and thorough, and also commented that Alek is an extremely efficient employee and follows all directions.

Thank you Sea Breeze for allowing Alek & Employment Horizons to work for you!